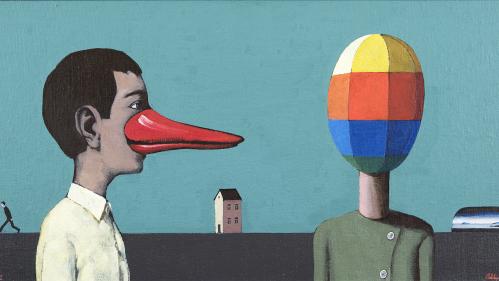 On display through July 31, the two exhibitions – Oleg Kudryashov: A Master of Printmaking and The Claude and Nina Gruen Collection of Contemporary Russian Art: New Arrivals – span six decades and offer a broad view of established nonconformists who began working during the Soviet era, alongside a new generation of post-Soviet-period artists.

For more than three decades, the Zimmerli has developed an unparalleled collection of work by Russian artists long overlooked in the art world. Today, their work isn’t only in high demand, but serves as a reminder how fragile freedom of expression is.

“These two exhibitions, which are based on generous gifts from Claude and Nina Gruen and the Robert Brown Gallery, add to the Zimmerli’s renowned Norton and Nancy Dodge Collection in two important ways,” said Julia Tulovsky, curator of Russian and Soviet nonconformist art who organized both exhibitions. “Oleg Kudryashov’s monumental paper constructions are witnesses of the artist’s perseverance to pursue his vocation despite any circumstances. And the Claude and Nina Gruen Collection bridges the nonconformist art with a new generation that emerged in the 1990s and 2000s.”

Oleg Kudryashov: A Master of Printmaking celebrates the artist’s 90th birthday, with 35 works created from 1959 to 1991. Kudryashov is one of the most prominent contemporary artists to have emerged in the late 1950s under the restrictive conditions of the Soviet Union. His life and art represent genuine nonconformity, as he eschewed both political ambitions and social expectations, pursuing only his calling as an artist.

As a child, Kudryashov experimented with unconventional drawing materials that he found on the street. His formal education was limited to the Moscow Animation Film Studios, a program he didn’t complete because he didn’t see his future in animation. Kudryashov went on to work in a variety of mediums, but is primarily known as a printmaker.

Although his work was appreciated by curators of major museums, including Moscow’s Pushkin Museum, Kudryashov couldn’t find employment as an artist and immigrated to London in 1974. He burned hundreds of his pieces because the Soviet authorities wouldn’t allow him to take them with him. He gained prominence at leading galleries in Europe and the U.S., with works in collections at major museums in the West, as well as Moscow. Kudryashov returned to Russia in 1997 and lives and works in Moscow.

The Claude and Nina Gruen Collection of Contemporary Russian Art: New Arrivals features 25 paintings, works on paper and collages created from 1958 to 2010. These works exemplify the wide range of subjects, styles and approaches of important Russian artists who have had far-reaching impact on the development of contemporary art in the former Soviet Union and beyond. .

The exhibition, which marks the first time many of these works are on view to the public, includes works by major artists such as Ilya Kabakov, Erik Bulatov, Victor Pivovarov, Mikhail Roginsky and Eduard Gorokhovsky. It also features works by a new generation of emerging artists. The art varies from reflection on social and political aspects of life in the Soviet Union and in post-Soviet space to metaphysical and abstract paintings.

The Gruens began collecting contemporary Russian art in 1984. They were particularly interested in the work of artists active from the 1950s, after the death of Joseph Stalin (during a period known as the Thaw), to the present. Spanning several generations, the collection underscores significant ways that changes in the social, economic and political spheres influenced Soviet nonconformist and Russian art.

In 2005, the Gruens selected the Zimmerli as the new home for their collection. The gift builds on and consolidates the museum’s strength in the art of Russia and the republics of the former Soviet Union. The Zimmerli’s focus on Russian art began with the acquisitions of the George Riabov Collection in 1990 and the Norton and Nancy Dodge Collection of Nonconformist Art from the Soviet Union in 1991. It also extends the Zimmerli’s Russian holdings firmly into the 21st century.

“Museums are dynamic institutions that reflect not only a society’s past, but also its evolving present,” said Maura Reilly, director of the Zimmerli. “The Gruen Collection represents the essential support from donors that allows museums to maintain their collections, as well as draw connections across generations and connect people to one another. We are grateful for the opportunity to present this artwork to the public and participate in the conversations that it inspires.”