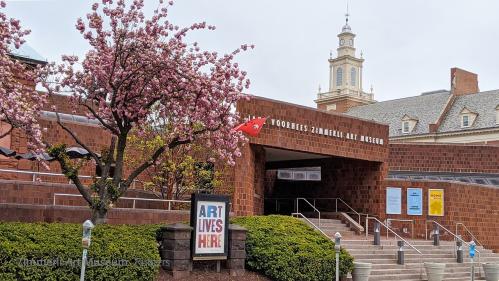 The Zimmerli Art Museum is one of the largest and most distinguished university-based museums in the country, and is located on the New Brunswick campus of Rutgers, The State University of New Jersey. The museum collects, preserves, researches, and exhibits world-class works of art to provide the university community and diverse regional, national, international audiences with direct experience of the visual arts. Scholarly activities make art accessible through exhibitions, publications, and educational programs.

Founded in 1966 as the Rutgers University Art Gallery, the Jane Voorhees Zimmerli Art Museum was established in 1983 in response to the growth of the permanent collection. The major benefactors for the construction of the museum were Ralph and Alan Voorhees, and the Zimmerli was named for their mother.

In 1991, Dr. Norton Dodge and his wife Nancy Ruyle Dodge donated to the Zimmerli some twenty thousand works created between 1956 and 1986 by nearly a thousand artists from Moscow, Leningrad, and the former Soviet republics, to create the Norton and Nancy Dodge Collection of Nonconformist Art from the Soviet Union, the world’s largest and most comprehensive collection of this kind.

The museum is headquartered in a 70,000-square-foot facility houses more than 60,000 works of art, with strengths in the Art of the Americas, Asian Art, European Art, Russian Art & Soviet Nonconformist Art, and Original Illustrations for Children's Literature. The permanent collections include works in all mediums, spanning from antiquity to the present day, providing representative examples of the museum’s research and teaching message at Rutgers.

The Zimmerli's operations, exhibitions, and programs are funded in part by Rutgers, the State University of New Jersey, and income from the Avenir Foundation Endowment, the Andrew W. Mellon Foundation Endowment and the Voorhees Family Endowment, among others. Additional support comes from the New Jersey State Council on the Arts, a partner agency of the National Endowment of the Arts; the Estate of Victoria J. Mastrobuono; and donors, members, and friends of the museum. Contributions from other corporations, foundations, and individuals, as well as earned income, also provide vital annual support for the Zimmerli’s operations and programs.

Rutgers, The State University of New Jersey, stands among America’s highest-ranked, most diverse public research universities, with 71,000+ undergraduate and graduate students, as well as 530,000 alumni around the world. Founded in 1766, as one of only nine colonial colleges established before the American Revolution, Rutgers is the nation’s eighth-oldest institution of higher learning.

Starting from an early emphasis on agriculture and the mechanical arts related to the university’s land-grant mission, Rutgers has expanded into an academic, health, and research powerhouse, tackling society's largest challenges and meeting the needs of each rising generation.

Rutgers is dedicated to teaching that meets the highest standards of excellence, to conducting research that breaks new ground, and to providing services, solutions, and clinical care that help individuals and the local, national, and global communities where they live.