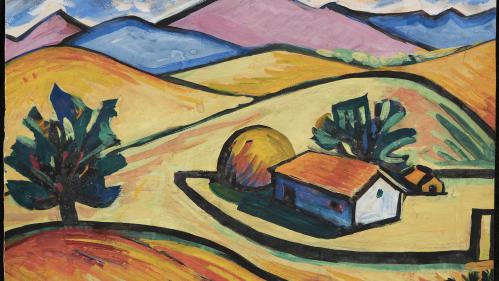 New Brunswick, NJ—The Zimmerli Art Museum at Rutgers University – New Brunswick is pleased to announce the opening of Locating Georgia: Selections from the Norton and Nancy Dodge Collection of Nonconformist Art from the Soviet Union on Oct. 5.

It is the first major museum exhibition in the United States to focus on Georgian art. It features more than 60 objects, primarily mixed media collages and works on paper, which were created from the 1960s through the 1990s. Otar Chkhartishvili, Amir Kakabadze, Levan Magalashvili, Sergei Parajanov and Avto Varazi are among more than 15 featured artists.

“This is a unique opportunity to see work by artists who are rarely exhibited outside of Georgia,” said Sopio Gagoshidze, the Zimmerli’s Dodge fellow and a PhD candidate in art history at Rutgers, who organized the exhibition. “It is divided into three sections that represent diverse aspects of a distinct cultural heritage that is often overlooked in discussions about the former Soviet Union.”

“The Personal is Professional” reflects how nonconformist artists in the former Soviet republics often worked during the era. They defied state-imposed conventions of socialist realism by working in their homes and private studios, forming underground networks to exchange ideas, as well as exhibit and sell their work. Subject matter focuses on these interior environments, including portraits and intimate scenes.

“Professions of Faith: Doubt as Dissent” examines the use of religious imagery, which was forbidden in the “secular” Soviet art world. However, as citizens of one of the oldest Christian nations in the world, Georgian artists incorporated religious symbols, rather than explicit political themes, as a more subtle strategy to express opposition to the dictates of socialist realism.

The section “Locating Georgia” addresses the politics of identity and provocative dissent. During perestroika (reconstruction), the last period of the Communist era (1986–91), a more lenient Soviet policy allowed “peripheral” republics, such as Georgia, to focus on traditional and national themes, thus opening new possibilities for artists.

“Many of the works on view demonstrate the complexity of the artists’ careers and identities,” said Jane A. Sharp, PhD, Rutgers professor and research curator for Soviet Nonconformist art, who consulted on the exhibition. “So, for example, although he is known primarily as a film director, Sergei Parajanov created many densely allusive two- and three-dimensional works that probe the interplay of Armenian and Georgian visual cultures.”

The public is invited to four free programs that spotlight the exhibition. SparkNight on Oct. 6 features an opening reception with tours led by Gagoshidze. Other programs include a panel discussion about curatorial challenges (Oct. 27), a virtual panel discussion (Nov. 4), and a film screening (Dec. 1). Additional information will be posted on the museum’s event calendar zimmerli.rutgers.edu/events in October.

On view Oct. 5 through Dec. 30, 2022, Locating Georgia: Selections from the Norton and Nancy Dodge Collection of Nonconformist Art from the Soviet Union is organized by Sopio Gagoshidze, a Dodge fellow at the Zimmerli Art Museum and a PhD candidate in art history at Rutgers University, in consultation with Jane A. Sharp, PhD, professor and research curator for Soviet Nonconformist art. The exhibition and brochure are made possible by the Avenir Foundation Endowment Fund and the Dodge Charitable Trust – Nancy Ruyle Dodge, Trustee.