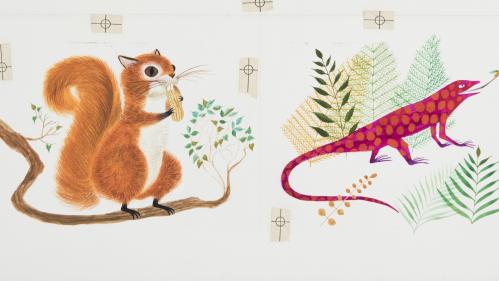 New Brunswick, NJ – Whimsical mid-century design was not limited to fashion or furniture, it also flourished in children’s books of the era. How Do You Say...? Learning Animal Names with Illustrator Art Seiden / ¿Cómo se dice…? Aprendiendo nombres de animales con el ilustrador Art Seiden, on view at the Zimmerli Art Museum at Rutgers from March 9 through July 31, showcases the artist’s ability to engage children with his timeless animal portraits in Zoo Animals for Children.

The 33 illustrations on view – exhibited together for the first time – are from the Zimmerli’s permanent collection, accompanied by labels in Spanish and English. In addition, an interactive gallery activity invites visitors to share drawings and the names of their favorite animals in any language.

“Art is an important aid for children as they learn other skills,” said Nicole Simpson, the Zimmerli’s Assistant Curator of Prints and Drawings, who organized the exhibition. “These books emphasize the importance of language acquisition during early childhood.”

In these illustrations, he painted detailed portraits of animals, in color and black and white, using gouache (opaque watercolor). Whether a mammal, bird, amphibian, reptile, or fish, Seiden gave each animal a distinct personality, capturing the beauty and diversity of our natural world. The broad range of hues on a peacock and ostrich add dimension to the texture of their feathers. The bright colors and animated facial expressions of a squirrel & lizard convey the satisfaction of their respective meals of a peanut and an insect. Black and white renderings of the intense concentration of a bear eating a fish and a shark hunting remind young readers about the danger of these predators.

Born in Brooklyn, Seiden was a graduate of Queens College and studied at the Art Students League in New York City. He was a member of the American Watercolor Society and The Society of Illustrators, among others. Between 1987 and 2003, Seiden donated more than 140 of his illustrations to the Zimmerli.